Amoulgam Aze Kerte is a lawyer and political analyst. He holds, after a double degree in legal and political sciences, a master's degree in human rights and humanitarian action option human rights litigation obtained at the Catholic University of Central Africa and a master's degree in governance and regional integration option governance from the Pan-African University. He is a researcher at the Canada Research Chair in International Criminal Justice and Fundamental Rights and the author of several books and articles in the field of international human rights law and international criminal law. He continued his doctoral studies at Laval University. 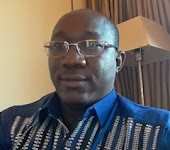